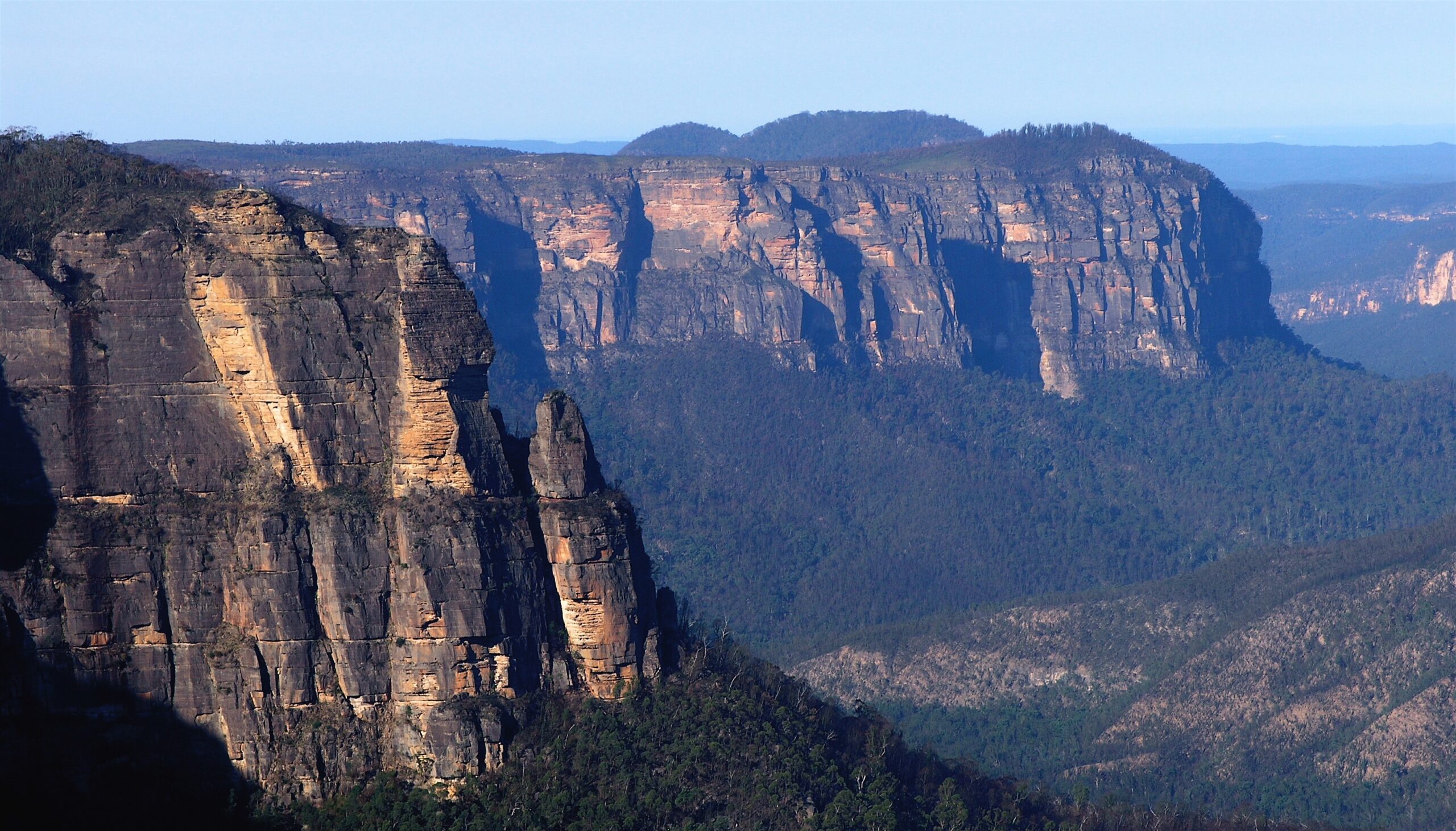 Apart from the crisp mountain air, a health tonic for retreat seekers since the early 1800’s, you are bound to be inspired by:

Eroded remains of an historic tableland crafted by waterfalls and rivers gouging out gorges and slot canyons.

An historic network of walking trails, many carved into cliff faces by pick and shovel  at the turn of the century.

The shouting contrast in values between natural heritage protection and the commercial rush. 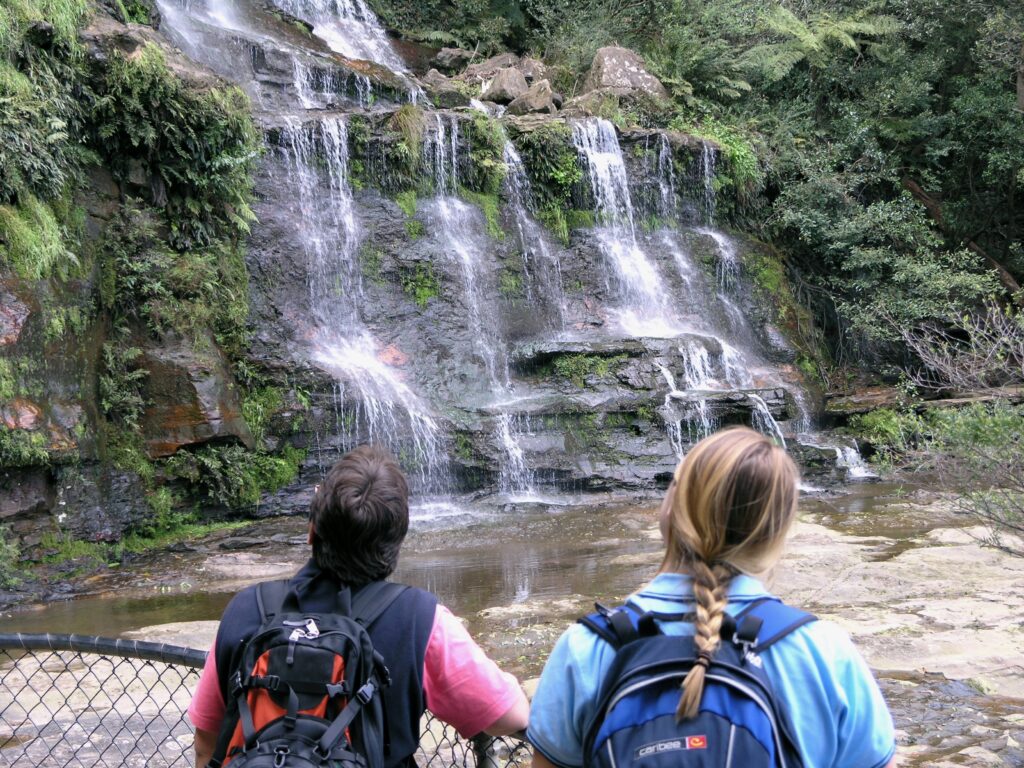 Inscribed into the UNESCO World Heritage List in 2000 for its natural values, The Greater Blue Mountains presents an extraordinary evolution story of an “incised sandstone tableland”, set down 247 million years ago.

There are distinctive rare and endangered species, exceptional biodiversity and a significant Aboriginal heritage, much of which was lost earlier to insensitive contact and diseases.

13% of all Eucalyptus species are located in the eight abutting conservation reserves making up the Greater Blue Mountains.

Ever present threats to the collective reserve have been identified as climate change, excess development, wildfires, habitat loss and species extinction.

From dinosaurs to Pulpit Rock

Our Brisbane to Sydney “Great Divide – Iconic Landscapes Tour” approaches the Blue Mountains from the north, skirting the first of the reserves, Yengan National Park.

We follow a convict built back-road through the “The Forgotten Valley” to the historic village of St Albans. A beautiful but very remote area bypassed by all major road and rail corridors out of Sydney. 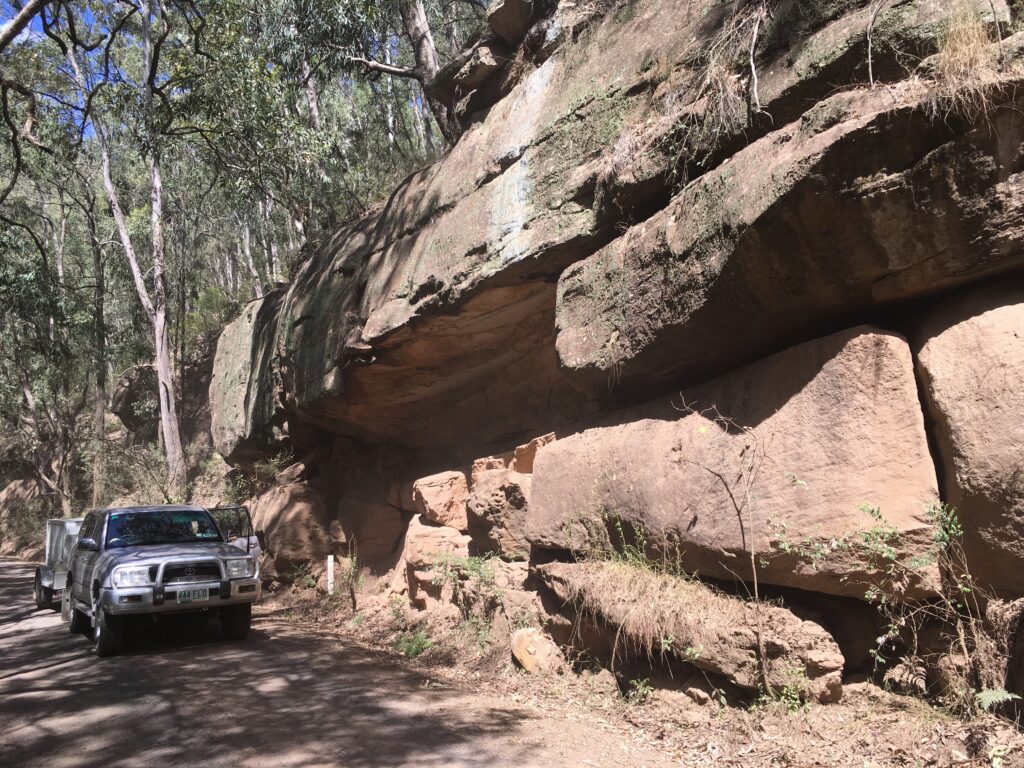 Convict built back road through the Forgotten Valley

We enter the world heritage area, visiting the Blue Mountains botanic gardens at Mount Tomah with cold climate terraced gardens dating back 120 years. Here we view the extraordinary Wollemi Pines drawn from base specimens found deep in a secret canyon of the nearby Wollemi National Park. 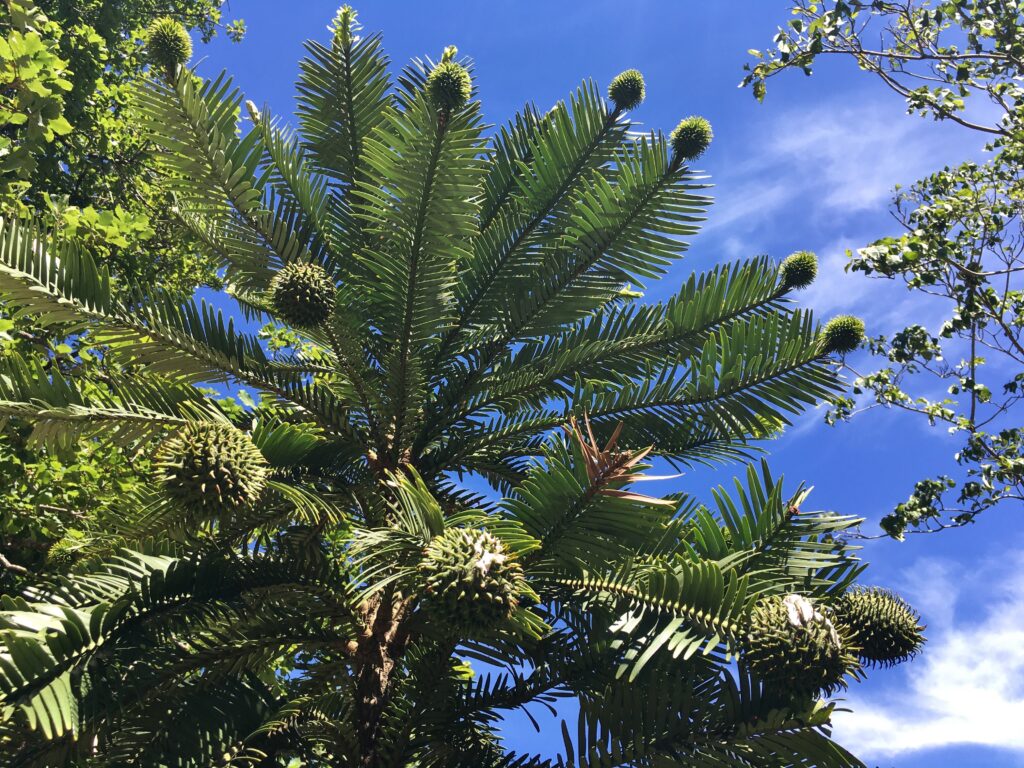 Wollemi Pine from the dinosaur era of natural history

Thought to be extinct but located accidentally in 1994, the Wollemi Pine is one of the world’s oldest and rarest plants unchanged from the dinosaur era of natural history – oldest known fossil 90 million years. Other plants with origins in the Gondwanaland  60 to 80 million years ago, are also located in the gardens.

We complete the day with an awe inspiring 6 kms return walk to Pulpit Rock from the staggering lookout by Govetts Leap. An equally stunning experience awaits at Pulpit Rock, perched on a massive blade of rock jutting out into the Grose Valley. 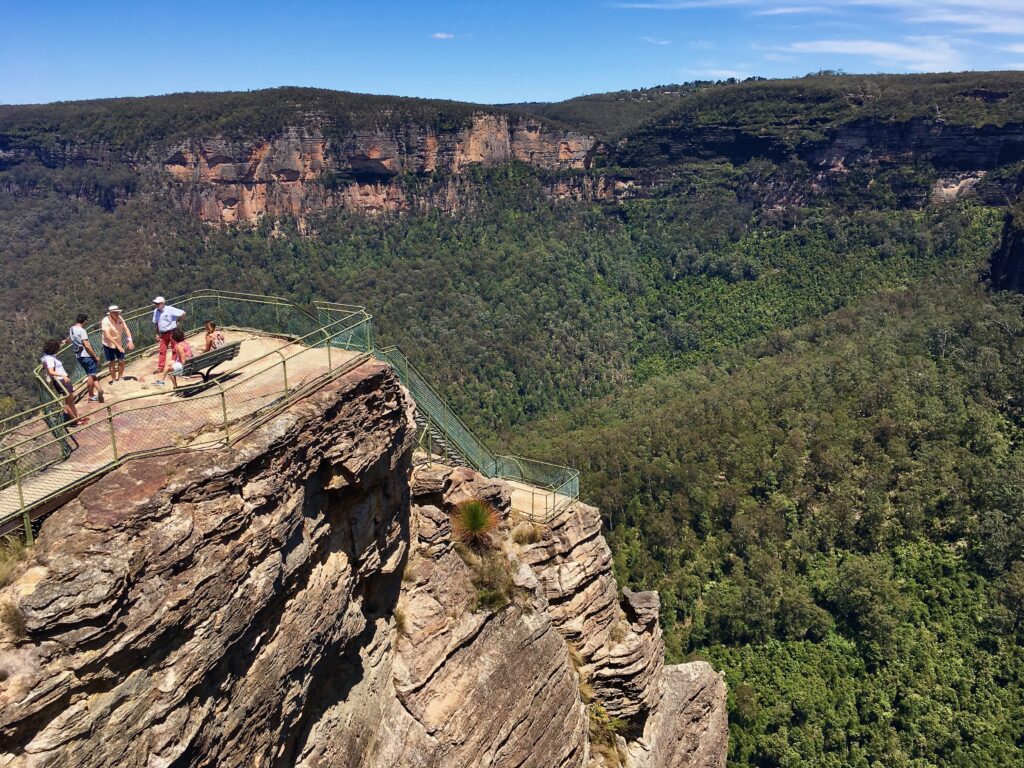 The 3 hour walk follows a graded trail through dense bird habitat heathland, by hanging swamps, waterfalls and ever changing cliff top views, culminating in a 280 degree gaze into the protected wilderness below.

A selection of trails provides relief from gathering crowds on convenient lookouts dotting the central ridge line and highway spine carrying road and rail traffic further into the golden west.

Choice of trails varies with each visit, subject to prevailing weather and trail conditions prompting national park management decrees at the time.

Each trail offers inspirational views over the Jamison Valley toward the Ruined Castle Ridge and Mt Solitary escarpments. The preferred trail choices include:

The sponge like swamps are vital to local plant and animal communities, releasing moisture even in the dry. There is heathland, rainforest glens and low growing mallee clinging to the cliff’s edge. 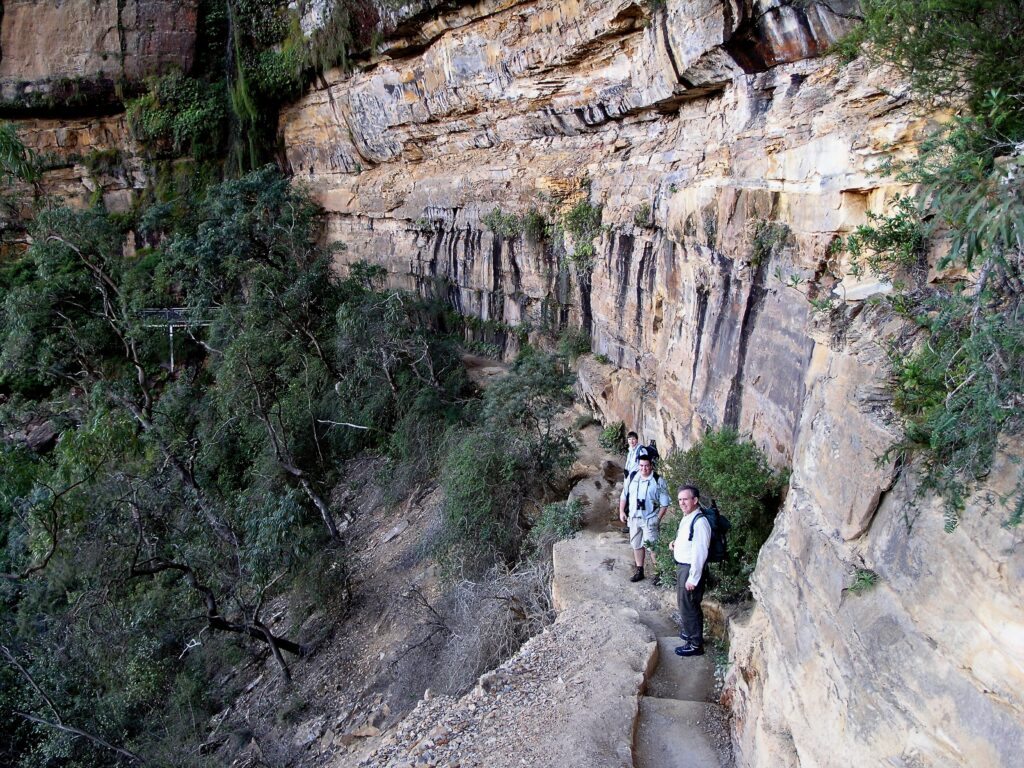 A 4 hour harder grade walk complete with spectacular scenery. This historic trail built more than 100 years ago follows a layer of red claystones etched into the high cliffs where the distinctive calls of Whipbirds, Lyrebirds, Rock Warblers, Honeyeaters and Scrubwrens provide a sensory experience. 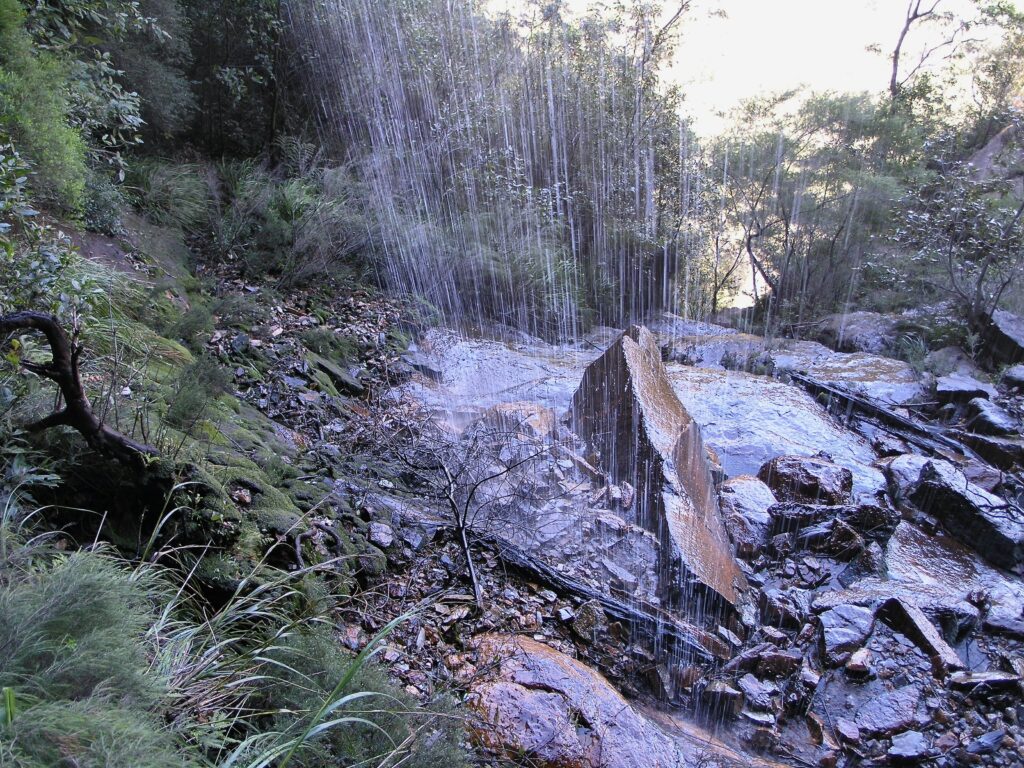 We duck under a waterfall, climb cliff face stairs and cross some cascades before returning to a Conservation Hut for lunch.

The Wentworth Falls Trail  to Rocket Point and Kings Tableland

Departing from a picnic area developed in the 1870’s with its exotic trees and free-stone walls, we follow older trails over the natural landscape to a series of lookouts, then hopping across the stepping stones above Wentworth Falls and completing a 1 hr heath walk of medium grade to Rocket Point. 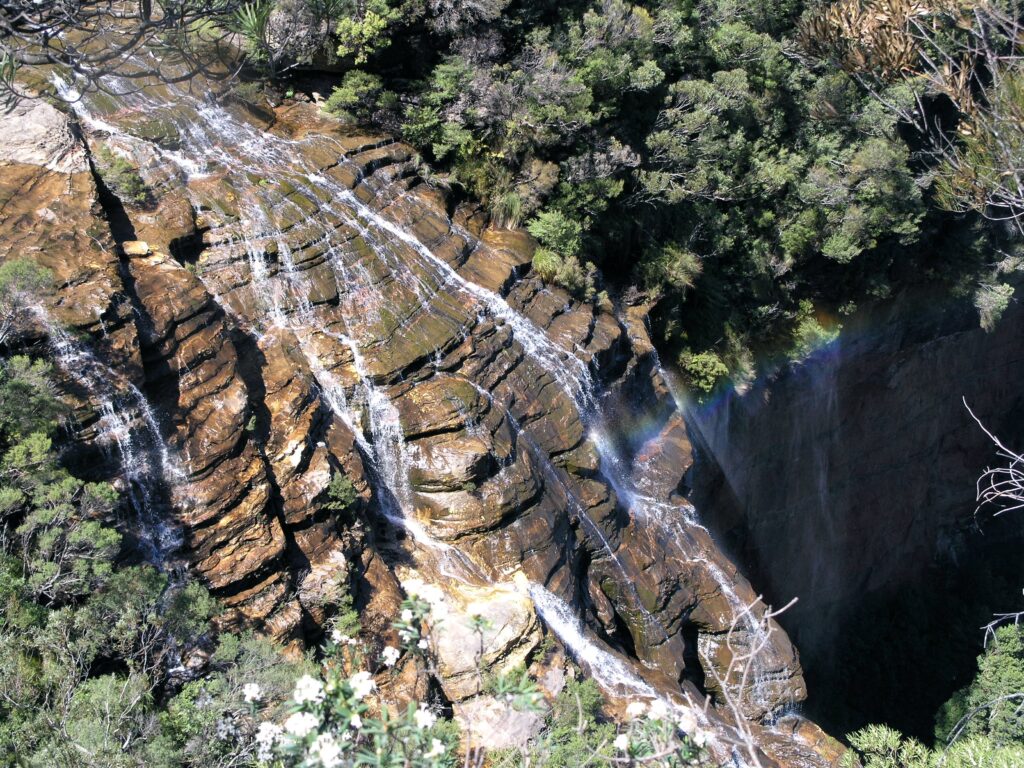 We conclude the day with visits to Sublime Point, the tourist’s choice “Three Sisters” and the National Parks Heritage Centre filled with interpretive and educational displays.

Jenolan Caves and the Kanangra Deep

We enjoy a full day rich in beauty and grandeur above and within Mother Earth, all part of the Greater Blue Mountains World Heritage Area. It requires an early start and drive into the Jenolan Karst landscape, dominated by a band of limestone, 9 kms long and 300 metres wide, located deep in a wilderness valley.

We time the visit for a guided tour of our preferred cave, the “Orient”. Considered a jewel of 10 or more caves available to the public. It involves a comfortable 470 metres walk underground starting with a 120 metre man-made access tunnel constructed in 1954. 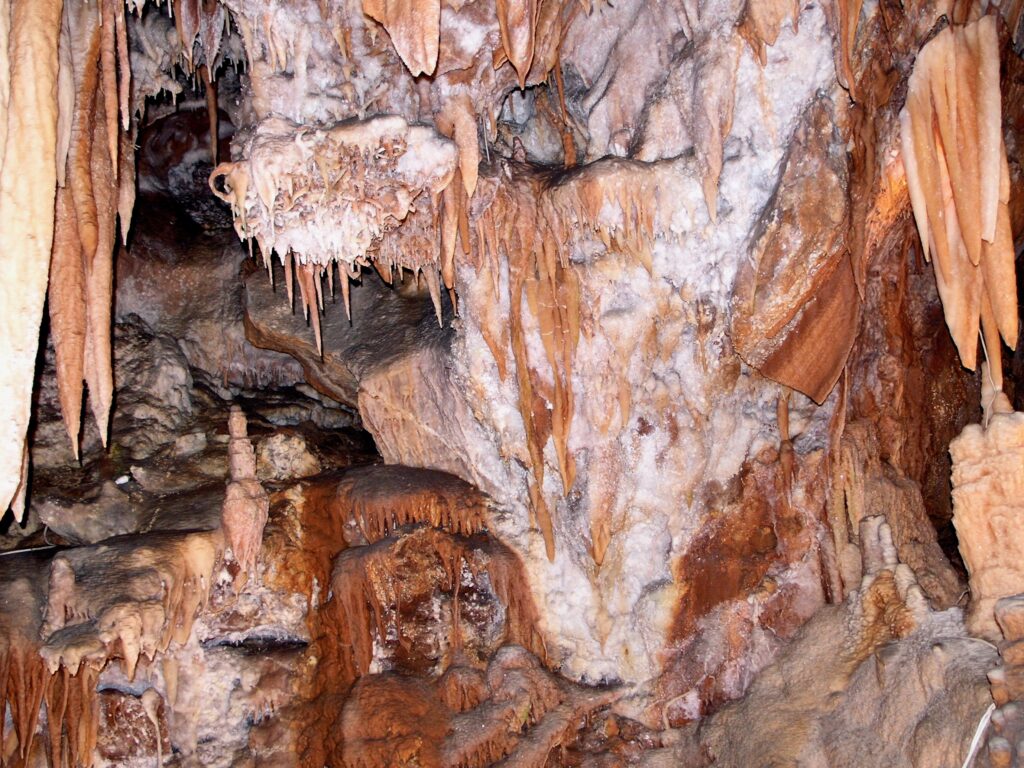 The cave was discovered by 3 men in 1904 and has three splendid main chambers, the “Persian”, “Egyptian” and “Indian”. Described as “a rich display of colour, massive chambers and extensive illuminated decoration”. The caves are filled with crystals, straws, stalactites, stalagmites and columns, even underground river systems.

The Orient Cave was steam cleaned in 1968, a world first. The reserve was declared in 1866 even before the creation of the world’s first national park. Accordingly, it was the first tourist attraction in Australia.

It all started with the hunt and capture of an escaped convict who was terrorising the region in the 1830’s. Two settler brothers tracked the convict / bushranger into the valley and by chance discovered and explored two great open caves, including the Grand Arch.

Over 300 caves have been discovered and recorded since, beyond the ten or so offered to the public. The nearby Caves House was designed and built in1897.

The Kanangra Boyd National Park stretches across the undulating Boyd Plateau and a labyrinth of creeks, rivers, deep gorges and ridges where the plateau falls away.

The rugged terrain defines the spirit of wilderness, land unchanged by human activity. We approach it on a link road from Jenolan Caves.

Scientists believe this wilderness and the future of humanity are linked to the area’s bio-diversity. Considering essentials, the area is part of a large protected water catchment for the growing population of Sydney.

Wilderness in not locked away but preserved for the human spirit to explore its potential, in solitude or escape. A return to mankind being part of the environment, not apart from it.

Kanangra is home to several rare and endangered species including the Brush-tailed Rock Wallaby, now confined to a few isolated cliffs throughout its former range.

Uniquely, the plateau features the botanical link between Mt Kosciusko and Barrington Tops species. It is known for its wild, windy and snowing conditions

A short 10 min walk from car park to lookout reveals The Kanangra Walls and Deep, an awesome sight with a plummeting drop of 600 metres. This has been described as the “most dramatic area of wilderness in Australia”, rivalling the New England National Park we visit earlier in the tour. 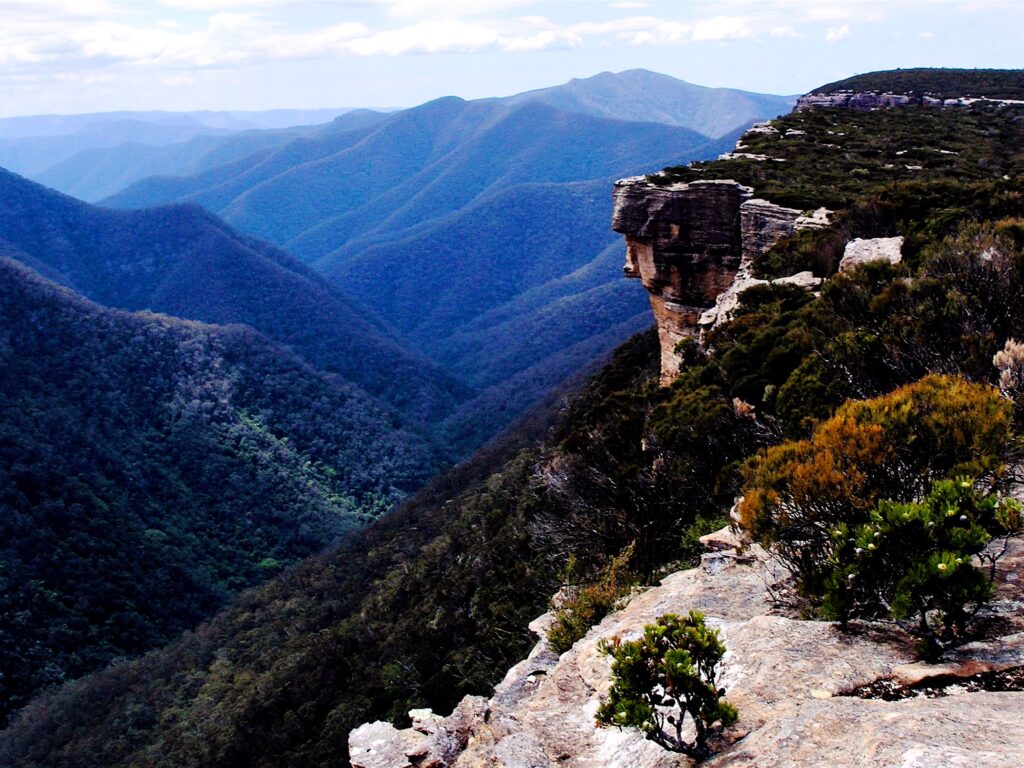 Kanangra Boyd Walls and The Deep

It was here in 1932 that conservationist Myles Dunphy called for Kanangra to be the first stage dedication of the Greater Blue Mountains National Park but it was 37 years before it was included.

It is believed that long before the colonisation of Australia, this was the spiritual home of the Australian Aborigines. The Thurat Spires and Rift observed on our walks are names of Aboriginal origin.

We embark on two possible walks from the initial lookout.

This 20 min, one-way, harder grade walk is short and steep, especially on return, rewarded by the cold clear waters of Kalang Falls which plummet over 400 metres in 8 stages into The Deep.

The trail descends gradually toward the plateau and Walls with an early short diversion to inspect the “Dance Floor Cave”. This cave was a shelter for the original Aboriginal inhabitants.

In  1891 a dance floor platform was installed by young local people for the meeting and social benefits of European families. Clean pure water would drip from the roof of the cave suitable for drinking. The platform has long been destroyed.

Once on top of the plateau a number of informal routes wind through the heath and along the unfenced cliff edge. Views into the Deep from the Walls and across to Thurat Spires are breathtaking. Skirting the cliff edge, the most photographed feature “Kanangra Rock” is reached. 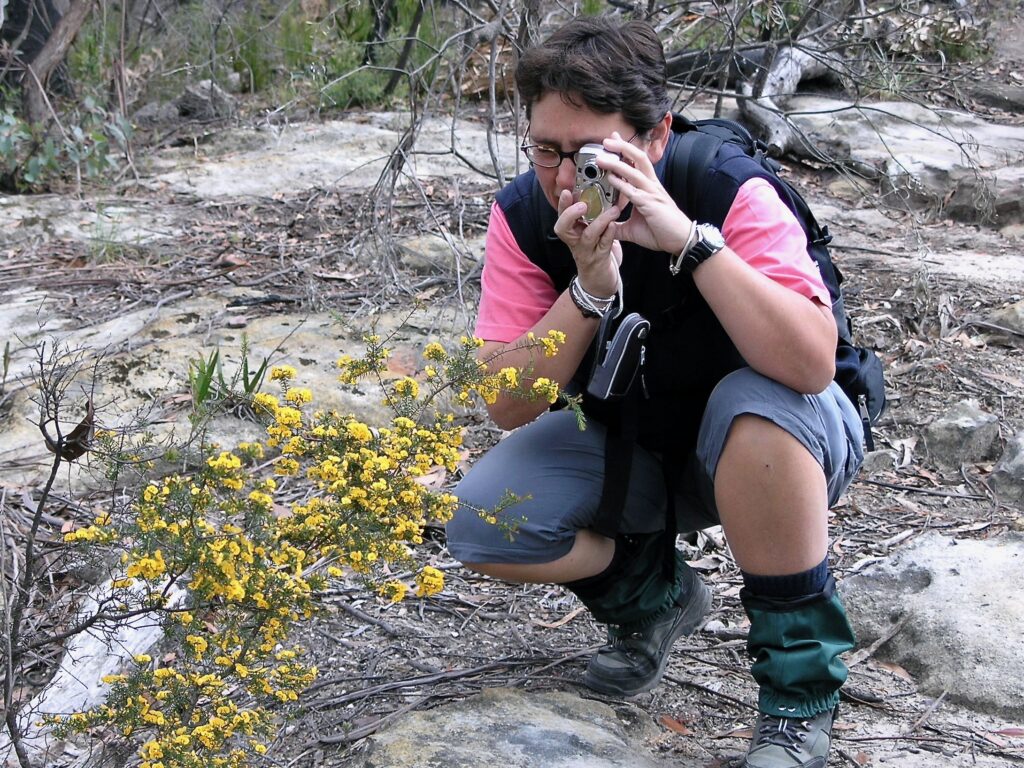 Time spent roaming along the plateau and walls, through the wildflower heath, is flexible (usually 2 hrs) as the relatively easy part of trail is only 1.25 kms long.

We return to our Blue Mountains base with a longer drive through the township of Oberon.

The final day of our Great Divide Iconic Landscapes Tour and Blue Mountains visit has arrived and what better way to celebrate than with a circuit walk into the Grand Canyon, not resembling the American equivalent. 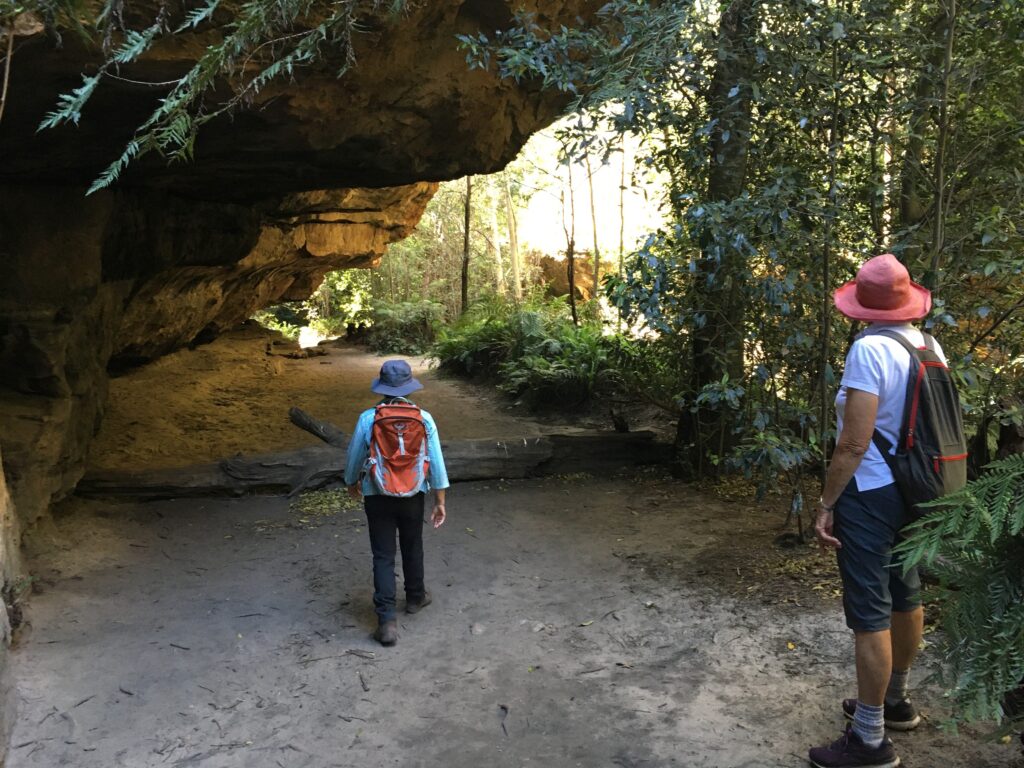 It involves a 5 kms, 3 to 4 hr circuit of moderate grade utilising a hand carved stone staircase established in 1907. Initially the trail descends steeply in a zig zag fashion through open woodland deep into the canyon protecting damper rainforest species.

Hanging swamps, tree and water ferns, carpets of moss abound and the stone steps can be wet and slippery – take care. Eventually the trail passes through the “tunnel” where you can peer down into the slot canyon and note the fixings for intrepid abseilers accessing the slot. 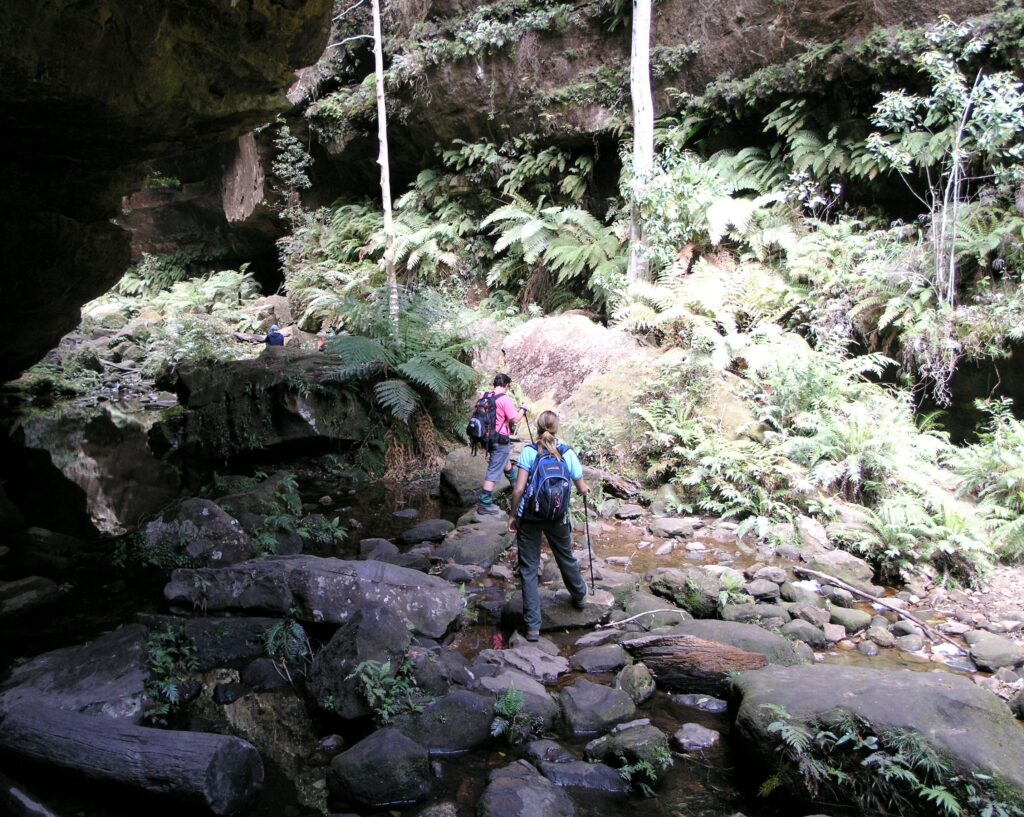 We then cross the creek a number of times as the Canyon opens up picking our way through vegetation to an intersection directing our ascent up a rainforest gully to Evans Lookout.

It is here in the messy forest floor we often meet with a Superb Lyrebird scratching for its afternoon meal. Apart from their extraordinary mimicking habits, the Lyrebirds are responsible for shifting tons of soil and litter across the forest floor maintaining the distinctive look of the Blue Mountains landscape. 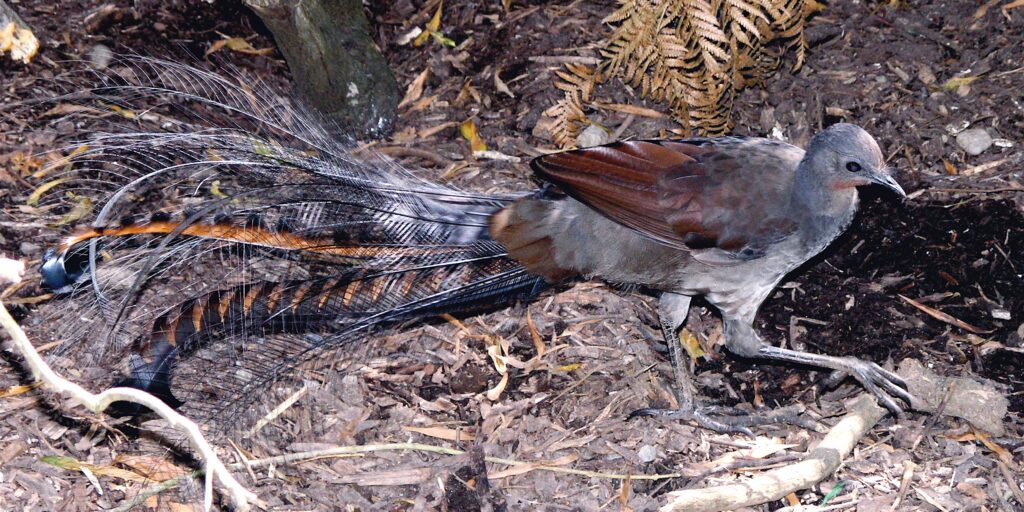 Studies have indicated the Grand Canyon was occupied by Aborigines at least 12,000 years ago.

Relaxed and fulfilled, we embark on the Western Highway run into Sydney, time permitting, with a drop into the Norman Lindsay Gallery and Museum.

This artist lived in the stone cottage for most of his long creative life, now managed by the National Trust.

Lindsay was a prolific cartoonist, fighting many controversies with “wowsers”, demanding the right to paint nudes, writing novels and children’s books including the “Magic Pudding” and making tall ship models and garden sculptures.

All is on display in our visit – time permitting.

Nature Bound Australia has conducted tours to the Blue Mountains many times since 2007, just one highlight of our 11 day Great Divide Iconic Landscapes Tour.