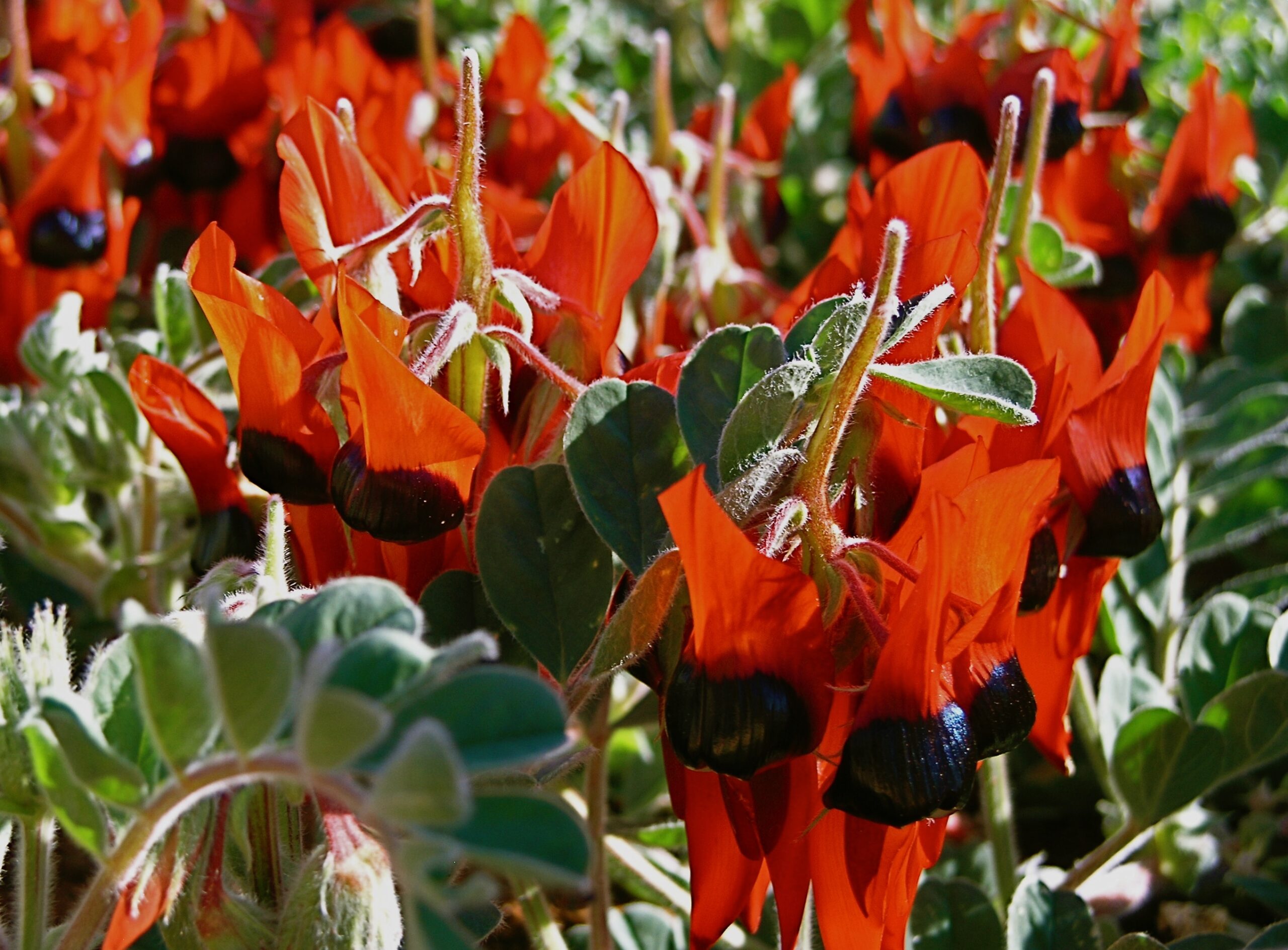 As a prelude to this amazing story of endeavour, we are reminded of how privileged we are today through our ability to venture deep into Australia’s outback and fascinating Corner Country with comfortable 4WD vehicles and access to all the creature comforts of home. Plus, we choose to travel in the cool of winter. We should not forget the efforts of those that showed us the way, back in the 1840’s.  We honour their efforts in our most popular 14 day Corner Country Outback Tour, which largely follows the trail of Charles Sturt, the “Father of Australian Exploration”.

Sturt was born in India, educated in England  where he joined the British Army, fighting Napoleon’s army at Waterloo. Promoted to the rank of Captain he was sent to Australia, escorting a shipment of convicts.

Assigned tasks to explore the Murrumbidgee and Murray Rivers his contributions led to the birth of South Australia and city of Adelaide. These plus a seemingly insurmountable challenge in the deserts led to him being Australia’s most celebrated explorer.

He was tall with a dignified military bearing but failing eyesight left him with a disconcerting gaze.

Nevertheless, he attracted the dedicated, almost fanatical support of a rugged band of men leading to the most important geographical work of the era, discovering Australia’s interior.

The Royal Geographical Society was so moved to acknowledge his “energy, courage, prudence, and conciliatory conduct with the natives”

The expedition was organised

It was in 1844, with orders from England to venture into Australia’s interior, Sturt assembled a band of 15 men from 300 applicants, not necessarily skilled but characters likely to be reliable under severe unknown challenges, physically and psychologically.

Besides 11 horses there were 32 bullocks in teams to drag 5 heavily laden drays, 200 sheep for fresh meat, hunting and sheep dogs and copious stationary with which to record his discoveries.

He also held a personal belief that there was a great inland sea, having observed the seasonal flight of birds, prompting the inclusion of a whale boat and two sailors. 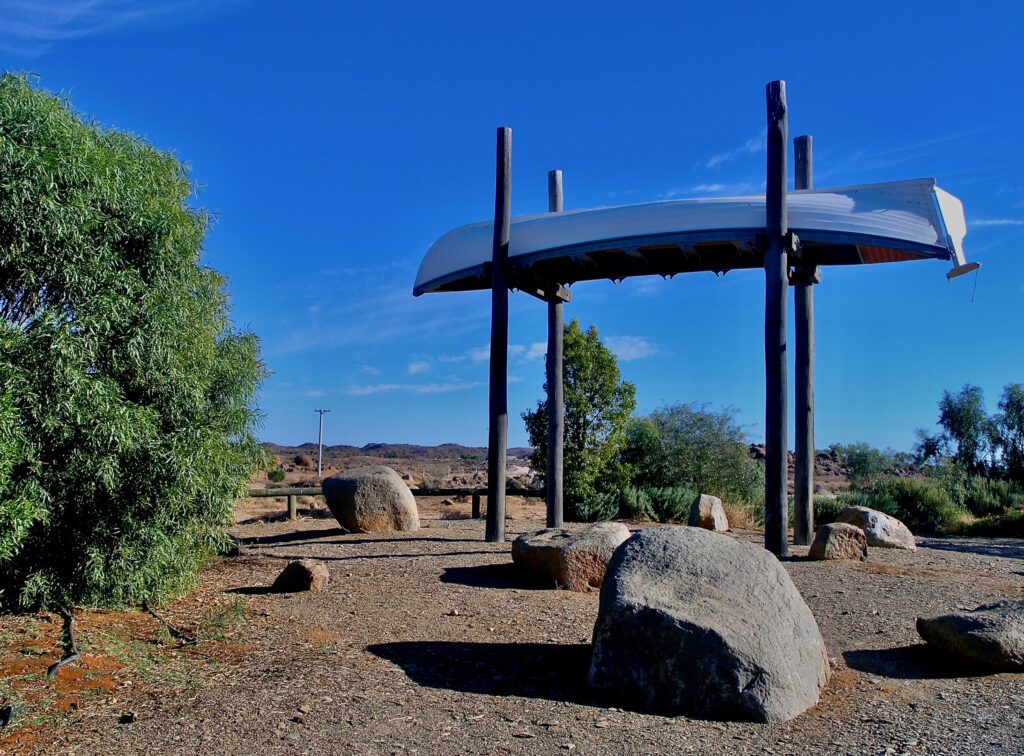 South Australia was on the brink of critical bankruptcy and Sturt’s preparations were hurried by the thought of climate change and diminishing water in a “summer furnace’. How right he was.

Crossing the Barrier Ranges near today’s Broken Hill the expedition encountered vast flat country and the need to scout ahead for camps with secure water. It was early summer with Sturt’s men searching desperately up dry gullies while encountering the painful penetration of spear grass in clothing and skin – including the wool and chests of the sheep.

Trail to summit of Mt Poole near Depot Glen

Progress was painfully slow, the expedition stretched in all directions and the Aborigines they encountered were described as “the most miserable human beings, poor emaciated creatures shaking with fear, thinking the white men were supernatural beings, like ghosts returning from the graves”.

The temperatures were rising to 69C and Sturt had to find water or have his men perish.

Where there’s water, there’s hope….. or so it seemed

Eventually, the men stood on the brink of a fine pond of water saving Sturt from a desperate retreat. He named the water source, “Preservation Creek”. It seemed a perfect depot site from which to continue the exploration and so they established “Depot Glen” (which we visit).

However, soon his men were suffering from the dreaded scurvy through lack of fresh food. The water in Preservation Creek was diminishing rapidly.

Teeth were falling out of combs, handles splitting on implements, boxes warping, soles of boots burning off, lead falling out of pencils, thermometers bursting. Fingers and toe nails became brittle, bullocks were scraping for cooler ground, dogs lost the skin on their feet. 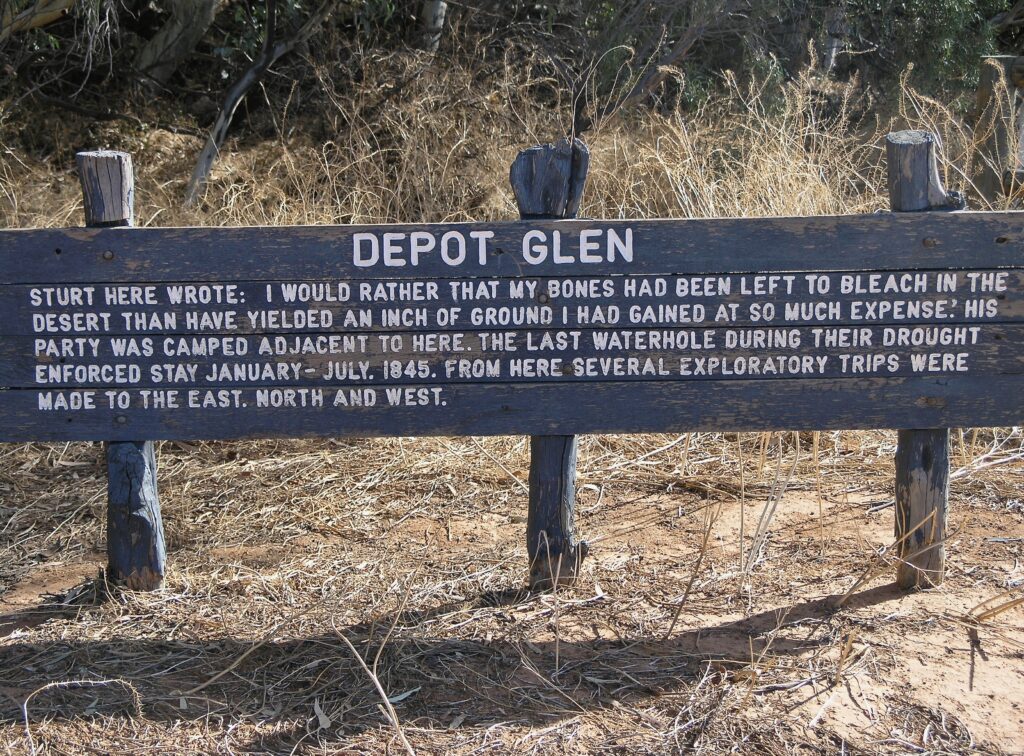 Expedition 2IC James Poole was suffering from scurvy, losing black skin from inside his mouth. Ants and mosquitos “swarmed in myriads”, especially in the bedclothes at night.

Aborigines told them there was no water or grass ahead and that they would die with their animals.

Sturt’s journal read: “I would rather that my bones had been left to bleach in the desert than have yielded an inch of ground I have gained at so much expense”

Sturt, with eyesight failing, ordered the digging of an underground room to enable work on his diary. The ground in the walls was hot to a depth of a metre.

For occupational therapy and good health Sturt had his men trekking to a nearby “red hill” to erect a large pyramid of stone as a survey point, not realising it would eventually become a monument to 2IC Poole on his passing. Today, the hill with monument is Mount Poole (which we climb). 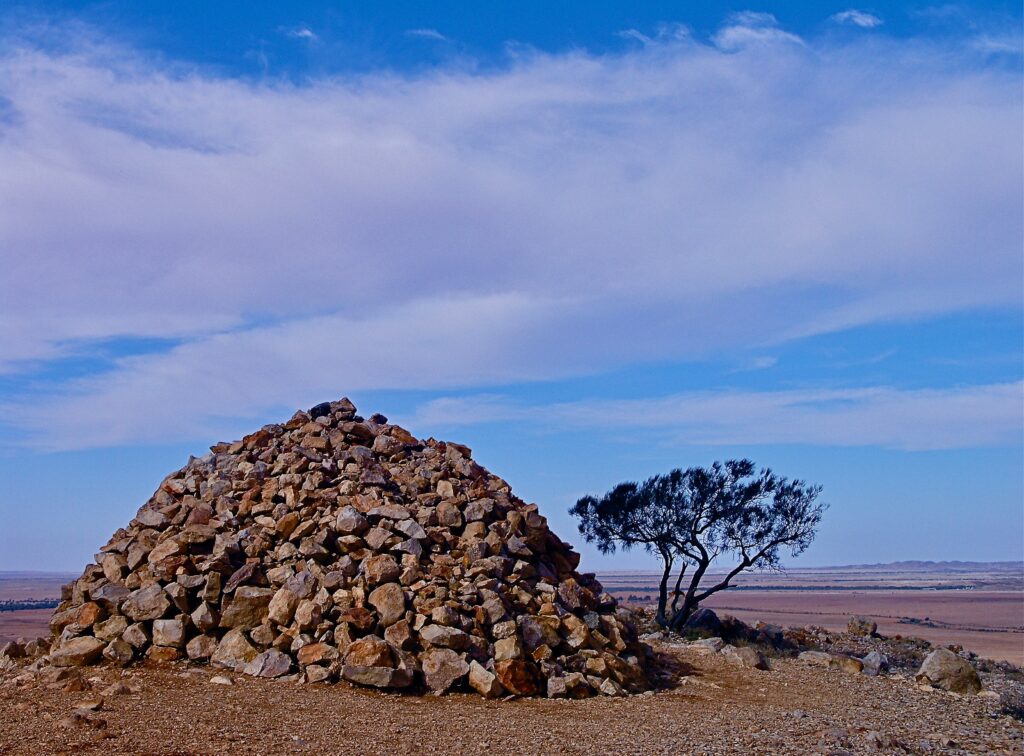 Sturt and his men had become prisoners at Depot Glen.

However, various water fowl and Pelicans were still flying over, seemingly unstressed, suggesting water existed somewhere ahead. At last the weather changed and Sturt determined to split the group with some returning to Adelaide and he, with a dedicated few, thrusting on for the North West, eventually to reach a watered camp at “Fort Grey” by Lake Pinaroo. (as known and we visit today). 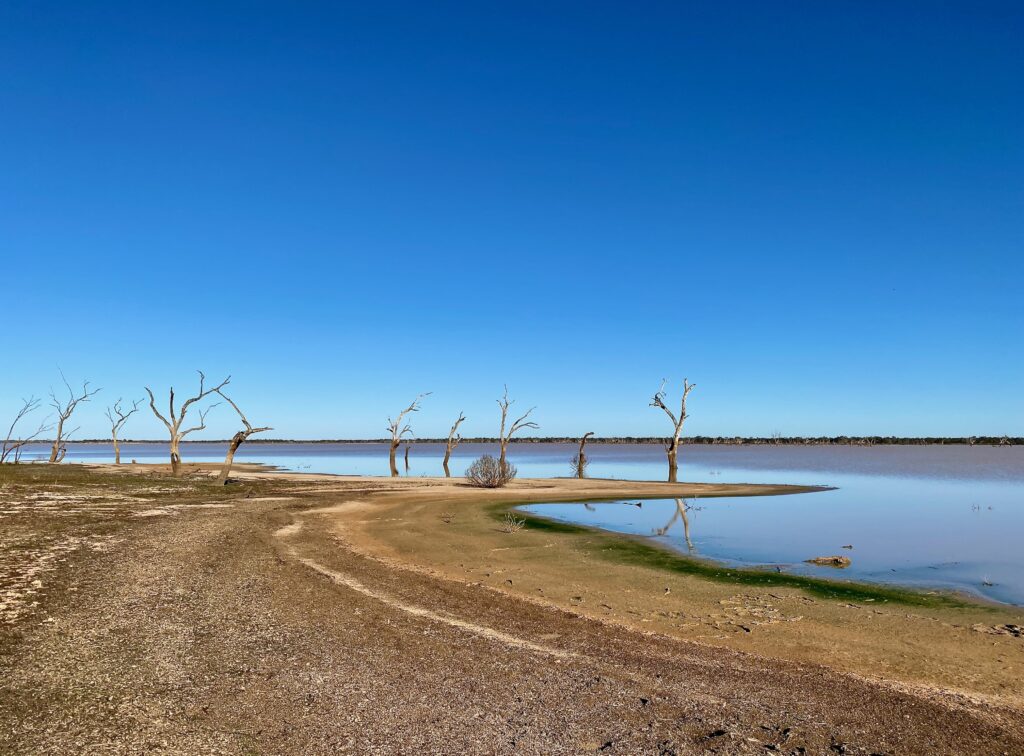 The expedition from there is a continuing eventful story of extraordinary endeavour with Sturt discovering and naming legendary destinations of today –  Strzelecki Creek and Desert, Cooper Creek, Sturt Stony Desert (we visit all). 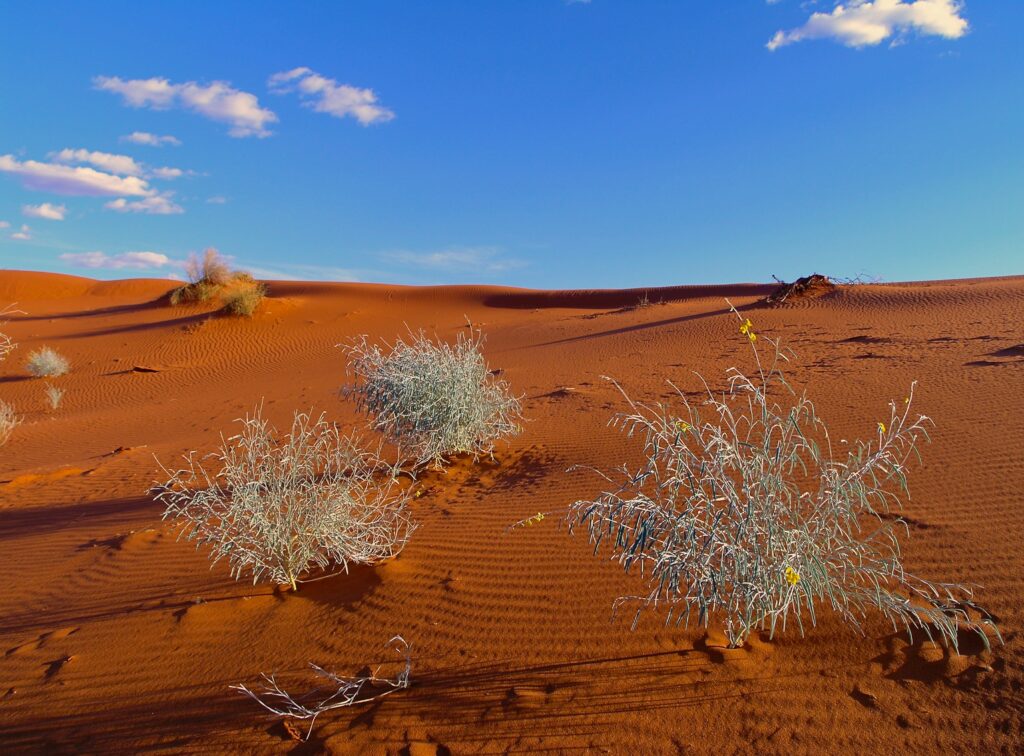 In a final thrust accompanied by the dedicated hero John McDouall Stuart, Sturt reached the Queensland Channel Country near today’s Nockatunga and Nappa Merrie Stations (we visit). By Cooper Creek they found the befriending Wangkumaara People, healthy, strong in complete contrast to the desert people 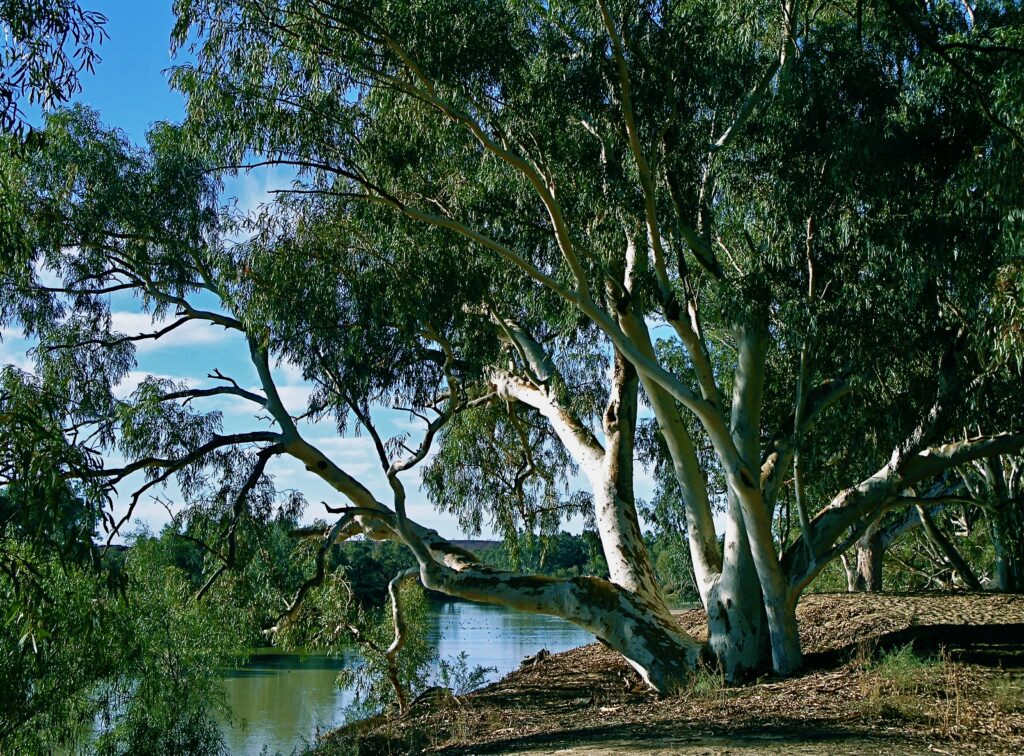 Sturt’s journal read: “Justice and Humanity have long been my guides, but while I have the consolation of knowing that no European will follow my tracks into these deserts without experiencing the kindness from its tenants, I have to regret that the process of civilised man into an uncivilised region is almost invariably attended with misfortune to its original inhabitants.”

After many exploratory forays north east and west, Sturt was eventually halted by the sand ridges of today’s Simpson Desert, a short distance from the centre of Australia and eventually the story returns to Depot Glen.

With bitter disappointment of failure, Sturt ordered the “turn around” and re-crossing of the deserts already encountered. He had been riding for 7 weeks 15 hours daily, covering 1600 kms, subsisting on 90 pounds of flour and water “pigs would have refused” He was in great pain with scurvy. His companions had promised his wife that they would remain with him to the last. 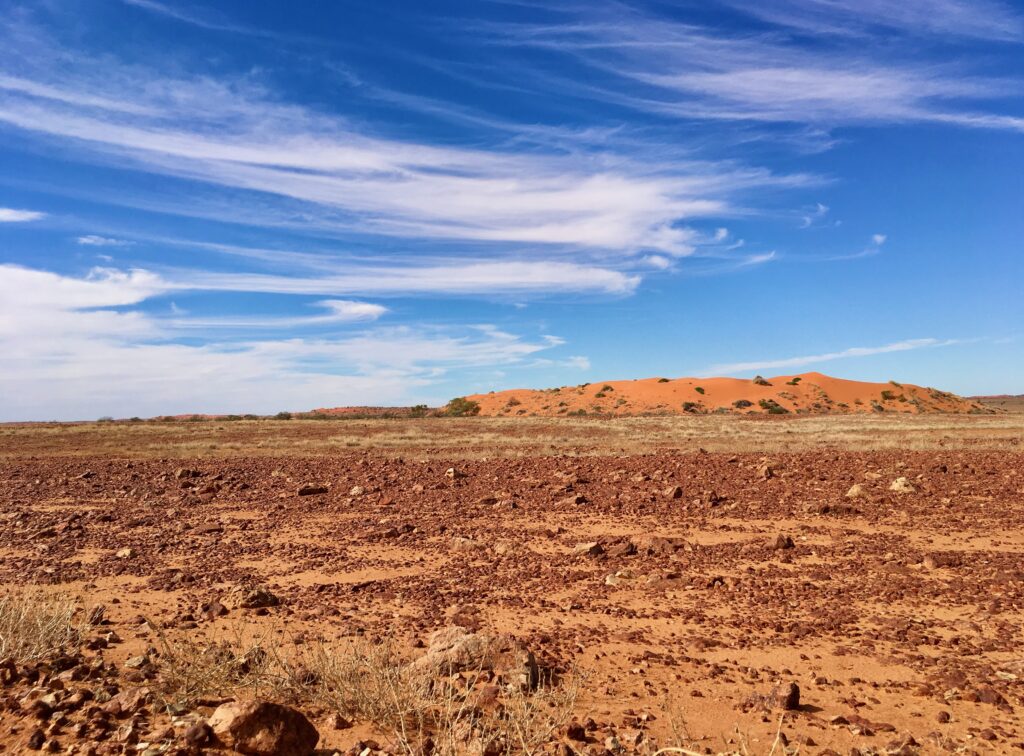 Arriving back at Depot Glen, riding all day and night accompanied by Stuart on staggering horses, Sturt stumbled and was carried and cared for by waiting members of the expedition. They prepared the remaining drays for a return push back to Adelaide, carrying Sturt on a cart for his limbs had deserted him. They journeyed in the cool, by lantern at night, appearing to be welcomed by the Aborigines.

Reaching a camp by the Darling River, Sturt was able to rest and partly recover. He determine on arrival he would ride unaided on horseback into Adelaide. News filtered through of an imminent return. He mounted his horse for the first time in 2 months, and with the help of private friends who had come out to greet him, skirted around the welcome reception in the town centre and headed for home and his wife Charlotte. On seeing him she fainted and collapsed on the floor.

Meanwhile in the Adelaide centre, onlookers stood breathless and silenced, in shock at the scrawny sight, the drays and equipment ruined by heat and sun, the horses were living skeletons and the remaining sheep followed along out of habit

Sturt’s expedition had covered in excess of 3000 kms in 17 months and the only possible vindication of the effort was his discovery of Cooper Creek, which today is a wilderness river.

Little did Sturt know at the time, his inland sea actually did exist, underground, in the form of the Great Artesian Basin, covering over 20% of the continent, one of the earth’s most extensive underground reservoirs.

Sturt’s achievement was largely possible through the dedicated and lasting support of John McDouall Stuart who at 29 years and just 54 kgs, suffering also from eyesight loss, scurvy and the ravages of liquor dependance, stayed with Sturt to the very weary end of the ordeal.

He went on to make a number of attempts at crossing Australia south to north, finally achieving this, both forward and back in the one expedition, eclipsing any acclaim around the Burke and Wills fateful expedition and folly.

Stuart planted a flag honouring Sturt as the “Father of Australian Exploration” on what he named Mount Sturt  in the Northern Territory – politicians later renamed it Central Mount Stuart.

Stuart’s path lead to the naming of the MacDonnell Ranges, Alice Springs and Finke River, the establishment of the Adelaide to Darwin Overland Telegraph Line connecting Australia to the rest of the world.

Sturt responded  in humble fashion, that he was not surprised at Stuart’s successes for:

“he was a plucky little fellow, cool, persevering, intelligent and an excellent bushman. He has fairly surpassed me and may justly claim the laurels.”

Nature Bound Australia has conducted tours to the Corner Country regularly since 2008, following the Charles Sturt and Burke and Wills journeys.

Tours in 2023 are scheduled for July 30 and September 10, with numbers limited exclusively to 7 guests per tour. 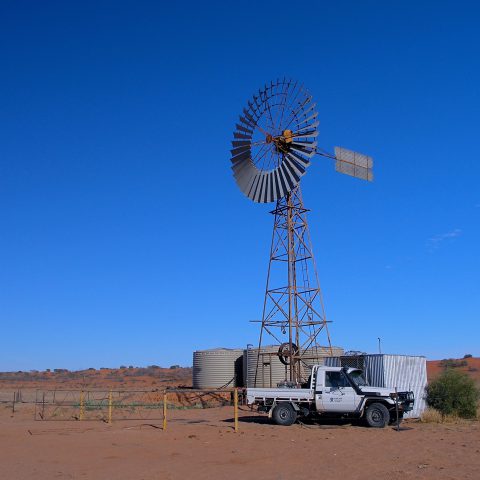 Secrets to life found in the Australia Corner Country 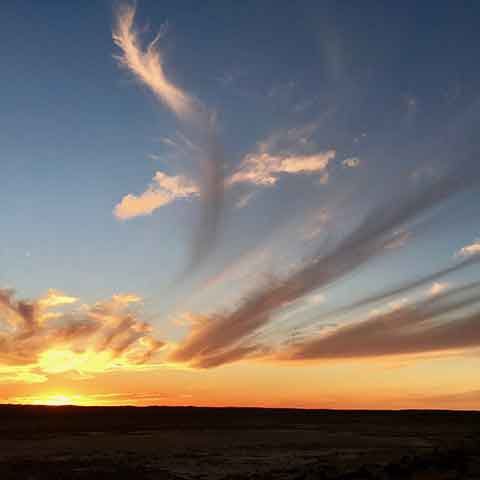 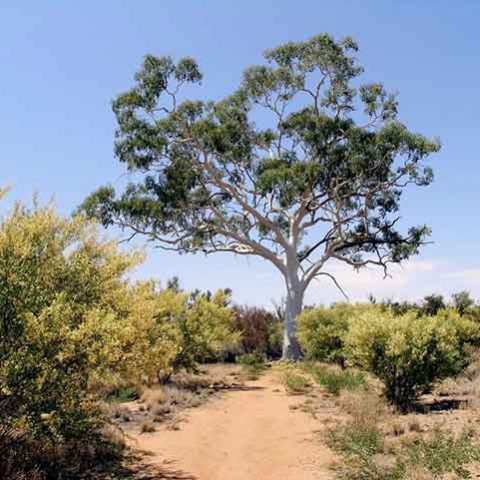