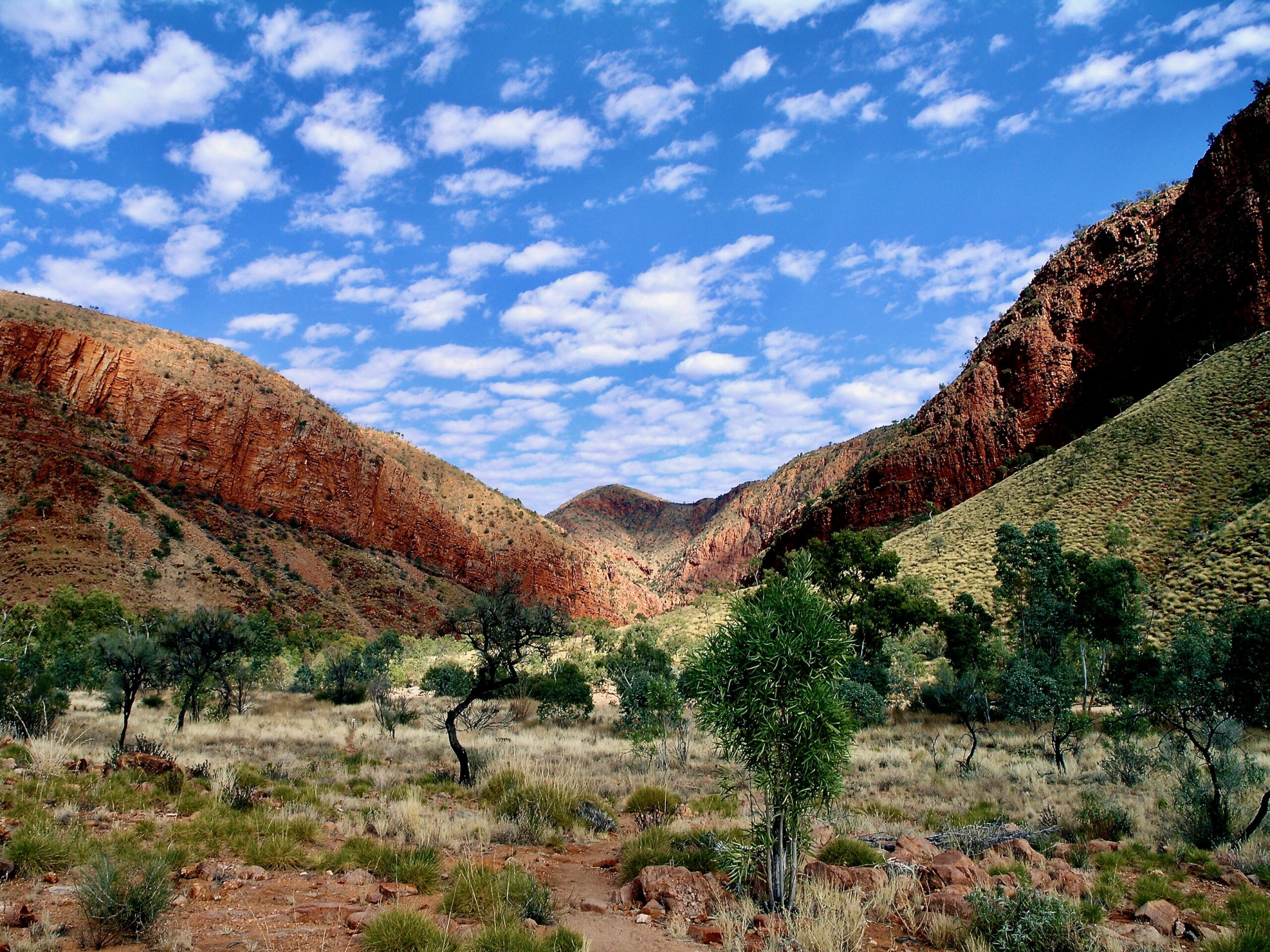 Up close in the heart of the West MacDonnell Ranges, Central Australia

The MacDonnell Ranges are aptly described as the “backbone of Central Australia”, a giant ancient range crawling hundreds of kilometres across the fiery red desert plains like a restless caterpillar on the march. They are located east and west of the central Alice Springs township.

Originally a range of mountains reaching 3000 to 4500 metres high, they still defy the powers of erosion applied over 500 million years.

About a billion years ago the ancient core of Australia consisted of a vast basin, the Amadeus Basin into which a  9 to 10 kms depth of sediment was dumped by timeless seas and rivers.

300 million years ago the earth experienced a violent upheaval with 600 million years worth of flat layered rock being tipped and contorted on its side during the Alice Springs Orogeny, giving birth to the West MacDonnell Ranges.

For today’s casual visitor, the awesome visual experience is testimony to successive convulsive earth movements depositing layer upon layer of rock over distances of up to 14 kms.

Some layers of the range are more resistant to erosion than others resulting in waves of jagged east-west trending ridges with creeks and rivers cutting directly across the grain of the country.

Significantly, the range is cut by headwaters and smaller tributaries of the most ancient of world rivers “The Finke River” which has followed the same course for 350 million years, compared to the mighty Colorado River in the USA, just 21 million years old.

Creeks and rivers have spared only the most resistant of quartzite rock and followed fault lines creating both spectacular and intimate gorges, chasms and gaps in which plants endemic to the area, wildlife and humans find retreat.

The rivers with their waterholes have been stripping and transporting gravel, sand and silt from an original range probably the size of the Canadian Rockies.

Deep pools are scoured into the river beds immediately downstream of the Gaps, Chasms and Gorges.

Features along the range are significant, connecting to the Western Arrernte People’s culture. The first peoples arrived 40,000 years ago, lived and hunted, while adorning the cave and cliff walls with their dreamtime stories of creation and spiritual culture.

Belief is that a couple of the gorges were home to friendly serpents while others were occupied by giant snakes. They call the Finke River “Larapinta” a name given today to a rugged multi-day hiking trail along the length of the range.

The range was named by explorer John McDouall Stuart in 1860 after his expedition supporter, the Governor of South Australia, Sir Richard MacDonnell.

Select features of the West MacDonnell Range include: 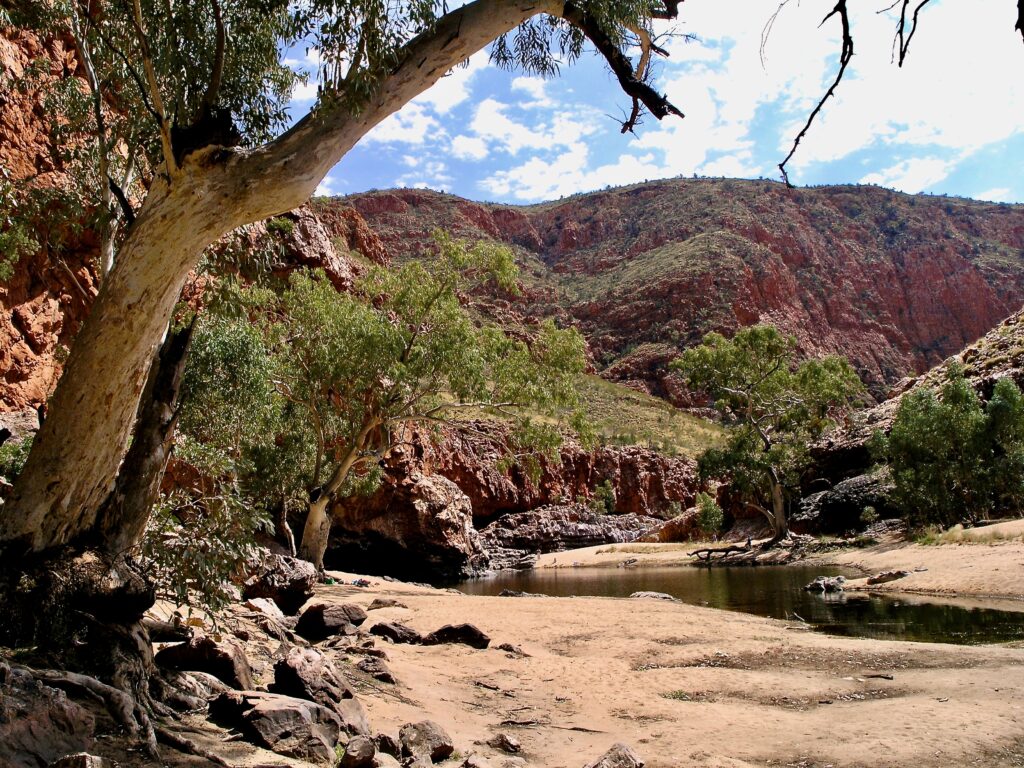 Regarded as the most spectacular of the many gorges slicing through the ancient ranges. The gorge has a near permanent waterhole up to 14 metres deep.

The towering 250 metre high cliffs show evidence of extraordinary earth movements having thrust hundreds of metres of quartzite on top of itself from several kilometres away.

Ormiston Gorge opens into a Pound 10 kms wide where the Ormiston Creek originates. The extensive contortion of rocks of varying colour and huge boulder spillage into the creek bed ensures Ormiston is a scenic jewel in the West MacDonnell Ranges. 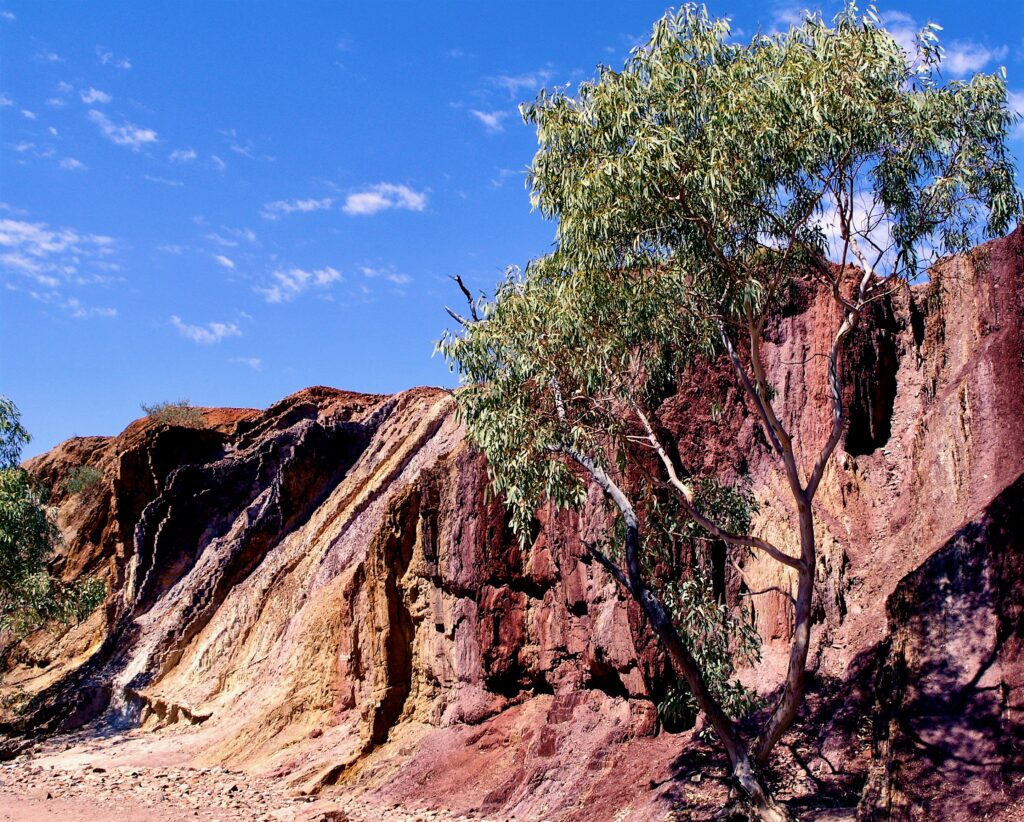 A colourful outcrop of ochre lining the banks of a minor sandy creek is an important part of local Aboriginal Culture and a vital part of everyday life, used for thousands of years by the Western Arrernte people.

Red ochre is used for medicinal purposes, white ochre as a magical charm. Weapons were painted with ochre for hunting success and protecting wooden weapons from termites.

The different colours result from different amounts of iron oxide present in the ochre.

The quality of the ochre enabled the Western Arrernte people to trade their valuable resource. People would walk hundreds of kilometres to obtain the ochre and trade items such as bush tobacco, spears, boomerangs or down feathers.

The Mungo Man buried at Lake Mungo in NSW 42,000 years ago, was found covered in Red Ochre, now regarded as a burial ritual of the time. 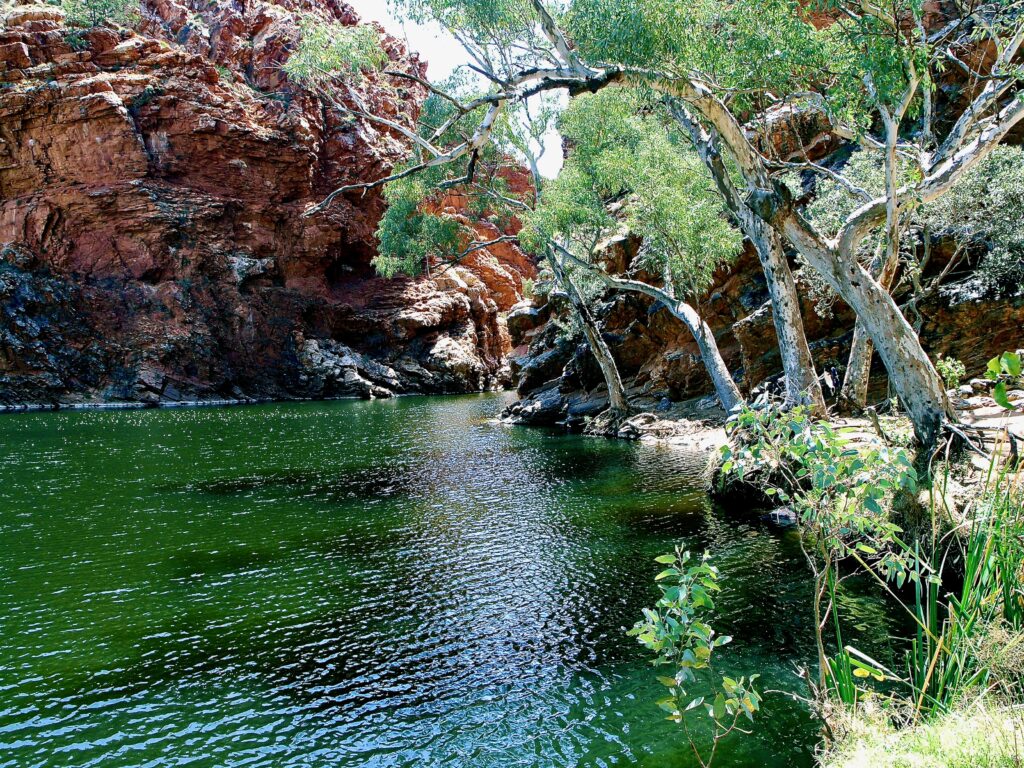 Ellery Creek Big Hole is one of the most popular and picturesque swimming and picnic spots in the Tjoritja / West MacDonnell National Park.

Thousands of years of massive floods have carved out the waterhole, which is recognised as an internationally significant geological site.

The Aboriginal name for Ellery Big Hole is Udepata. The permanent water made it a special meeting place for the Arrernte people on the fish and honey ant dreaming trails.

Dingoes are often seen visiting and drinking from the waterhole. River Red Gums and Ghost Gums shelter the picnic area. 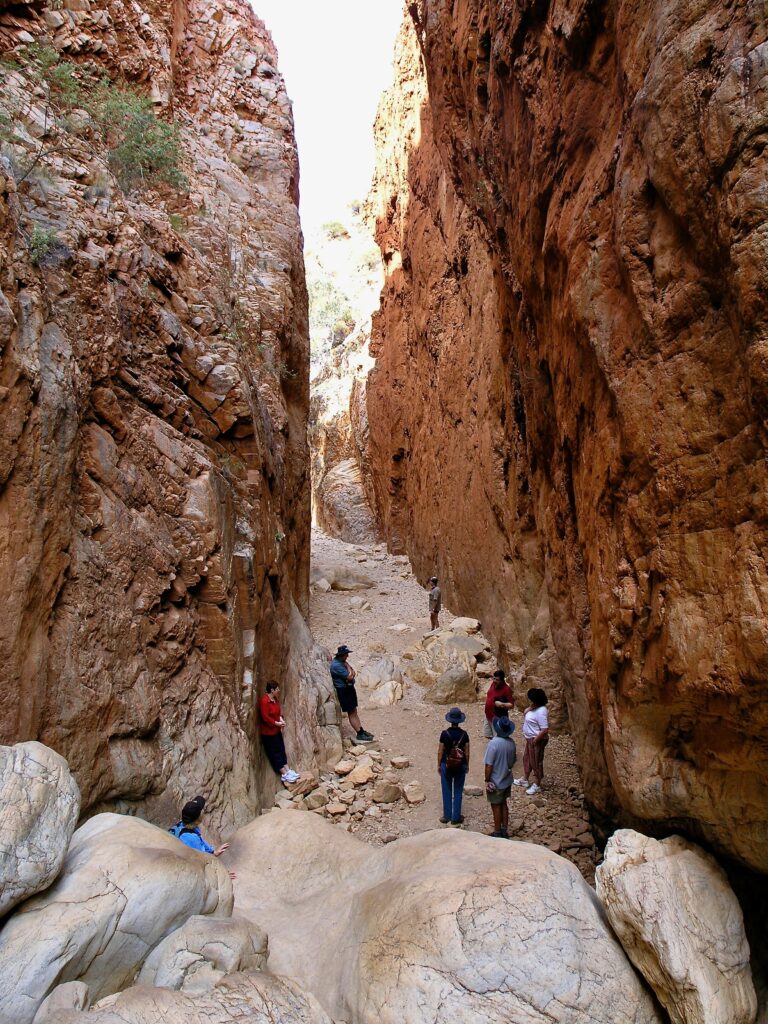 The Standley Chasm has been gouged out by millions of years of flooding down a narrow tributary of the ancient Finke River System. The result is an 80 metre deep red cleft crowded on either side by craggy slopes.

The Chasm’s European name honours Mrs Ida Standley who in 1914 became the first school teacher in Alice Springs. She was the matron of a school for children of Aboriginal descent and became the first non-Aboriginal woman to visit the Chasm

An inspiration at any time of the day, the Chasm is at its most dramatic an hour either side of noon on a sunny day when the sheer walls glow in their rich red colour.

The Chasm is located in a private flora and fauna reserve owned by the Iwupataka Land Trust and is operated by Aboriginal family members, direct descendants from Aboriginal people that have lived in this area for thousands of years.

Tours in 2023 are scheduled for June 3 and June 25 with numbers limited exclusively to 7 guests per tour. 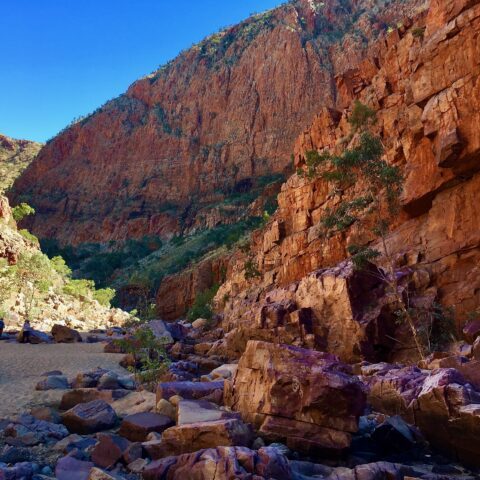 Why is Ormiston Gorge a “must see” destination in outback travel?