Your guide to facts, milestones, natural history and trivia

On arrival in Australia the uniqueness of our country is vividly apparent through its diverse landforms and habitats, vegetation and wildlife. From the beaches to the outback, the Gum trees to Kangaroos, so much is synonymous with Australia. Here are some Interesting Facts about Australia a curious offering of facts and trivia.

Enhance your assimilation of places, people, history, quirky events and activities. The strange sayings embedded in our language. Be well informed about Australia before you travel to Australia and enjoy!

Find out more about our small group Guided Walking Holidays or take a quick and easy review of all the tour features in our convenient tour comparison chart.

Would you like to know more?  Enquire today as we are happy to assist.

Our journeys (typically the Uniquely Australia National Parks Tour) traverse a range of vegetation zones and associated habitats. The continent’s drift north from the moist polar region, the extreme age of the soils leached of nutrient, the lack of “recent” soil generating volcanism and the presence of bushfires has produced a vegetation unique in the world. 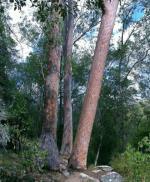 The Australian Eucalypt or gum tree with its 500 species is a dominant feature across the continent and a survivor of its conditions. It is a Sclerophyll or hard leaved tree adapting to open dry or denser moist conditions and even alpine environments. It is regarded as the toughest hardwood in the world. However, its highly inflammable eucalypt oil content has made ours the most fire prone continent of all.

The Dry Sclerophyll forests are fairly open with sun penetration to the forest floor. Sparse grasses, dead leaves and twigs cover the floor, providing fuel for fires which in turn play a roll in seed release and germination. The penetrating sun and poor soils provide opportunity for a wide variety of unique wild flowers. Here exists the habitat for our most endeared forest birds, grey kangaroos and koalas.

The Wet Sclerophyll forests occur primarily in the east and south-east of the continent. Better quality soils and moister conditions support tall stands of trees, densely positioned, shading an understorey of ferns which in turn shelter the foraging wildlife.

Towering hardwood trees 30m to 60m tall exist in the south-east. In the Tasmanian wilderness the majestic Mountain Ash at 80m to 100m is the world’s tallest hardwood and the tallest flowering plant. An isolated community of magnificent Karri Trees grow in the continents south-west. Cool, damp air in the wet forests enhances the aroma of oil bearing and peppermint gums and other aromatic plants. Flocks of lorikeets feed on eucalypt blossom while the scarlet and green king parrots and sulphur crested white cockatoos screech through the canopy. 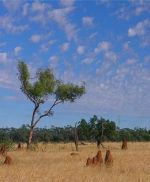 The Rainforest canopies are so densely arranged they intermingle and “close the roof” on the forest floor creating an extraordinary natural ecosystem. Narrow belts of rainforest can be found on the eastern fringes of The Great Divide where the ancient Antarctic Beach trees with their gnarled, moss covered trunks await your discovery. In the wet tropics region of Queensland the rainforest is claimed to contain an almost complete record of the evolution of plant life on earth and the highest concentration of primitive flowering plant families in the world.

Located between the central arid regions and the coastal forests is a broad band of Woodlands featuring open grassy landscapes dotted by scattered trees and shrubs dominated by Eucalypts and Acacia (wattle). In the far north the savannah woodland features from inland through to the sea. The trees with their thick bark are strongly fire-resistant and a profusion of wildlife is easily observed in the open including kangaroos, wallabies, eagles, echidna (spiny anteater), cockatoos and parrots.

Grasslands are found on vast expanses of inland flat country, interrupted by rocky ridges. The only true grassland typical of the North American prairie is the Mitchell Grass Country featured in our Outback to Reef journey. Here tussocks of grasses are resistant to occasional drought and heavy grazing. This is black clay soil country which cracks, so preventing any root growth and tree survival. In the tropical north the abundant grasslands provide sustenance for grass eating termites which have built thousands of towering mounded homes across the plains. “Fire-stick farming” was once practised by Aborigines who flushed out game for food and grassland seeds were ground on stone to make their flour. Seed eating birds, galahs, eagles, the Australian bustard, kangaroos and goannas frequent these habitats. 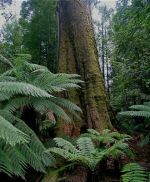 Also in the north the unique and attractive paperbarks can be found in coastal brackish swamps, often existing in pure stands. There are also large expanses of Salt Marshes running through to Mangroves, lining inlets and estuaries inundated by the tides. Here lies the vital breeding habitat of marine and freshwater species, a burgeoning population of migratory birdlife and the Australian estuarine crocodile. Wet monsoons dominate the summer months and then it is dry for the rest of the year. The largest single Australian habitat occupies 40% of the continent. Our inland arid and semi-arid regions (typically enjoyed on our Corner Country tour; Flinders Ranges, Lake Eyre, Red Centre Tour and Central Australia Tour) support few substantial trees. Here clumps of spinifex grass, hardy drought resistant shrubs of mulga and saltbush prevail. After rain, there is a rush of energy, growth and bloom from short-lived plants following their long periods in dormancy. Reproduction is triggered in the wildlife population. Australia has few lifeless vistas. However, animals have to range widely for food and speed is essential to reach the safety of the underground burrow. Most are fast runners, some raised on their hind legs or leaping with agility. Most are nocturnal using the cover of darkness for cool and safety. Sight, smell and the ability to blend with the colour of their surrounds is vital. The arid regions in the south are bordered by a dwarfed Eucalypt known as Mallee. These trees have a number of thin stems rising from massive underground root structures which survive in low rainfall and salty soil conditions. Here the Mallee or Salt-bush scrub provides shelter and leaf litter for the mound building mallee fowl incubating its eggs in the mound. You will discover the Mallee Country on our Big Rivers Tour.

Australia’s Alpine habitats are confined to small regions of the high country toward the southeast corner and in the island state of Tasmania. Bogs, marshes, sphagnum moss, heath and even the colourful and twisted snow gums, a hardy species of Eucalypt, survive tenaciously above 900 to 1500 metres altitude in grotesque weather-beaten forms. In the granite high country of Mount Kosciuszko mean monthly temperature can be below freezing for 8 months of the year. Essentially our high country is a rolling tableland caused by a great uplift in the continent’s eastern edge some two million years ago, at that time changing the flow of some rivers from east to west. Crimson rosellas and gang gang cockatoos, red-necked and swamp wallabies, rodents living under the snow and pigmy possums all call the high country their home.

Birth of One Nation

Australian’s have crafted their own version of the English language, typifying their relaxed and rather informal, open approach to life. It is branded as “strine”.

Predictably, the language can lead to some highly amusing true and not so true story telling and enjoyable social interaction during your travels. Here are some typical/common words you might encounter: